History of the Watkins Mill Association
The Farm
The Mill
Timeline

In Every End, a New Beginning: The Watkins Mill Association

Carrie Watkins was the last of her family to live at what was then known as Bethany Farm. She had been blind and deaf for many years, and at age 89 in 1943, she moved to Washington State to live with her niece.

Two years later, Henry Frass, a Texas rancher, bought the property and on May 6, 1958, his sister Emelia Frass Mason held an auction to sell the house, the mill, their contents, and the surrounding property.

That morning, on a whim, Forrest Ingram and Lee Oberholtz, of Independence, Missouri, couldn’t contain their curiosity. By the time they arrived at the auction, the house had been sold and the auctioneer was moving to the mill. It had been a long day and he wanted to go home for dinner, so he auctioned the mill and its contents in one fell swoop. Mr. Oberholtz didn’t know his friend was in the bidding, and was surprised to find Mr. Ingram had successfully purchased the mill contents – three floors of machinery – for $650!

Together with their supervisor, Allis-Chalmers executive George Reuland, they formed the Watkins Mill Association.

George Stilley of Raytown, Missouri, had purchased the Watkins property and was anxious to see the mill preserved. He gave the Watkins Mill Association an option on a small parcel of land around the house and mill so that the machinery could remain intact at its original location in the mill.

In early 1963 a bond issue to purchase the property was placed on the county ballot, but it failed to pass. The association turned to the Clay County Historical Society for help in passing a second bond issue.

The historical society had been trying since 1935 to get the property made into a state park. Their members went door-to-door campaigning for the issue and in November of 1963 Clay County voters approved a $186,000 tax initiative to purchase the mill, the Watkins house, and around 600 acres for a state park.

On January 1, 1964, Watkins Mill officially became a Missouri State Park Board property. Since then, the Watkins Mill Association, has served as the friends group for the historic site and has worked closely with the state to preserve Watkins Mill.

Waltus Lockett Watkins was born near Versailles, Kentucky on October 30, 1806. When he turned 18, he was sent to live with his uncle, a successful textile mill owner, and was trained as a weaver and machinist. In 1830, Waltus relocated to Liberty, Missouri in order to be near the bustling western frontier. There, he purchased machines for carding wool, and his business began to prosper.

While visiting his mother in 1834, Waltus married Kentuckian Mary Ann Holloway. Upon returning to Liberty, they began their family with the birth of a son, John. George, and Alfred soon followed. At this time, Waltus sold his mill and relocated his family to an 80-acre farm 16 miles north of Liberty, which he named Bethany.

With the deaths of both John and Alfred, the first year at the farm was difficult. However, Mary Ann soon gave birth to a son, John Handy, then daughter Kate who was followed by six other siblings. By 1850, Bethany Farm had grown to nearly 1,300 acres. With the success of his livestock, crops and orchards, Waltus was able to construct a brick kiln, a gristmill, a saw mill, a new family home and a woolen mill. During this time, Waltus assisted in the establishment of a community school, the Franklin Academy, and in 1871, the Mount Vernon Missionary Baptist church.

Watkins continued to increase his landholding over the years and by 1880 he owned 3,660 acres in Clay and Ray counties. In 1884, Waltus died and the property was divided among his sons, who continued with its daily operations for many years. From 1886 to 1905, fabric production and related mill operations steadily declined as machinery fell into disrepair or demand for certain goods slowed. The family remained on the property until 1943, when 89 year old Carrie Watkins moved to Washington State.

The Watkins property exchanged hands twice before 1964, when it became a State Historic Site and was declared a National Historic Landmark in 1966. In 1981, Missouri voters approved a bond that provided funding for the improvement of state buildings that included the restoration of Watkins Mill and its neighboring structures. A Visitor’s Center and Museum was added in 1991.

When it was operating full time, Watkins Mill employed 40 workers – 25 men, 10 women and 5 children. Most of the men were highly proficient workers called operatives. The women were weavers and the children were often apprentices who were learning the mill industry. The Mill’s original workforce included immigrant English, Irish, French Canadian, German and Swedish employees, as well as individuals from the eastern United States. Because of the skill involved, mill workers were often well paid.

The process was quite detailed. After a sheep was sheared, the wool was matted together to resemble a thin rug, then rolled into bundles. About two-thirds of the material was then sorted by grade and scoured, washed by a willower, a machine that pulls the wool apart and removes dirt and natural oils. It could then be dyed and made into yarn or cloth. From there, the scoured, unscoured and dyed wool went to the picker room, where the sorts were divided and placed into uniform layers, then fed into the picker, which prepared the wool for carding by pulling it apart into small, fluffy bits.

Carding machines untangled individual fibers and reduced sheets of wool to a continuous strand. The material was then ready to be spun into yarn. After this, the yarn could be sold or continue within the manufacturing process to be woven into cloth, often with complex patterns.

A 60-horsepower slide-valve steam engine powered the Mill’s looms and machines. The engine’s wood-fired boiler provided the 100 pounds of pressure needed to operate the Mill’s equipment at the correct speed. Mr. Watkins purchased the engine, which had been salvaged from a river steamboat, from St. Louis.

Although the milling process and its associated equipment and employees were expensive to maintain, the business was profitable. Because of transport costs during the 1850s and ‘60s, goods produced on the East Coast were not always readily available throughout America. As a result, by 1870 there were about 880 woolen mills located in the Midwest alone.

1806 – Waltus Locket Watkins (Christened Walthus) is born in Kentucky. As a boy, he is apprenticed to his uncle’s mill in Bardstown, Kentucky.

1854 – The Watkins family moves into their new brick house. Carrie Watkins, the longest surviving member of the family, is born in July.

1860 – The Woolen Mill is built and wool carding begins, ramping up to full production of woolen fabrics over the next year.

1886 – Due to the breakdown of a finishing machine and the decrepit nature of other machinery, Watkins Mill stops producing fabric. Other production gradually declines until all operations cease in 1905.

1943 – Eighty-nine-year-old Carrie Watkins moves to Washington State. She is the last of the family to live at the farm.

1958 – Emelia Mason sells the Watkins farm at auction. Forest Ingram and Lee Oherholtz buy the Mill and its machinery for $650. Together with George Reuland, they form the Watkins Mill Association and open the Mill for tours.

1963 – A bond issue is passed by Clay County voters, authorizing $184,000 to buy Watkins Mill. The county deeds the property to the Missouri State Park Board. The first archaeology dig at Watkins Mill is conducted on the Woolen Mill’s engine and dye room annex.

1964 – Watkins Mill is dedicated as a Missouri State Park and State Historic Site.

1965 – Restoration begins on the Woolen Mill.

1966 – Watkins Mill is designated a National Historic Landmark by the Department of the Interior and is also listed on the National Register of Historic Places.

1967 – Restoration begins on the exterior of Mt. Vernon Church.

1972 – Restoration begins on the exterior of the badly deteriorated Franklin Academy building. Archaeology is done on the Watkins scalehouse and the scale pit, which housed the big floor scale used to weigh wagonloads of wool and grain. The road in front of the Mill is also investigated.

1976 – Watkins Mill is designated a Clay County Historic Landmark. The Daughters of the American Revolution restore the Watkins Fruit Dryhouse as a Bicentennial project.

1977 – Having been closed in with bricks in the 1950s, the Watkins House back porch is restored.

1979 – An archaeological dig investigates the Watkins Icehouse and the Icehouse pit. Attempts to find the Watkins Log Cabin are unsuccessful.

1981 – Archaeologists locate the Watkins log cabin foundations, confirming its location just to the north of the 1850 brick Home. The Watkins Summer Kitchen is reconstructed. The interiors of Mt. Vernon Baptist Church and the Franklin Academy are restored and the iron bridge on the old State Road is restored. The first of many craft fairs is held.

1983 – The Watkins Gristmill is stabilized and the first phase of restoration work done.

1984 – The Watkins Home receives a new roof and the interior is partially restored.

1987 – The Watkins yard, fence, privy, and chicken house are investigated by archaeologists. Although the original fence lines are located, the privy turns out to be from ca. 1915 and the chicken house from the 1940s.

1988 – An archaeological dig on the Watkins 1850-70s privy uncovers a wealth of household goods and provides a great deal of information about the family’s lifestyle.

1989 – Archaeology reveals that the Watkins Woolshed was much bigger than had been thought. Information from the dig, combined with photographs, indicate that it was a large two-story structure. Another dig locates the foundations of the cabin where William Waers, the Mill’s dyer, lived with his family. George Reuland, co-founder and long-time president of Watkins Mill Association, dies. (Also, in the 1980s, the Association funded a trip to Texas to retrieve some original Watkins Home furnishings.)

1990 – An archaeological dig locates thousands of iron tools and artifacts in and around the foundations of Watkins’ Blacksmith Shop.

1995 – The second phase of restoration is done on the Watkins Gristmill.

1998 – Scenes of Ride with the Devil, by Ang Lee and starring Toby McQuire, Skeet Ulrich, and Jewell, are filmed at Watkins Mill. Watkins Mill Association replaces two sheep killed by a dog.

2000 – Watkins Mill Association funds the first paid Internship position at Watkins Mill. Original Watkins furnishings are returned to the Historic Site with funding from the Association and help from Watkins descendent Chad Means. The Smithsonian Institute’s travelling exhibit, “Barn Again! Celebrating an American Icon,” is on display in the Visitors Center and Museum.

2002 – Watkins Mill Association underwrites the cost of creating and publishing Waltus Watkins and His Mill, a book by former site administrator Ann Sligar with photos by board member and Watkins relative, Megan Wyeth.

2004 – Watkins Mill: The Factory on the Farm, by Dr. Louis Potts of the University of Missouri, Kansas City, is published.

2009 – New exhibit panels are installed in the Visitors Center and Museum.

2014 – The Association successfully integrates social media resources into operations, cost-effectively communicating with Watkins Mill Visitors, Volunteers and Members. Increasing active stakeholders is essential to building a self-sustaining future for the Historic Site. The Association launches its first popular annual fundraiser – the Get Outdoors Day Run around the Park’s scenic lake.

2016 – The Association launches a second major fund-raising event, the Harvest Gala.  Based on growing community support, it becomes an annual event. 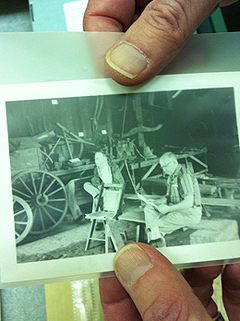 In 1958, Lee Oberholtz and Forrest Ingram purchased the mill and all of its contents at auction, and with George Reuland, formed the Watkins Mill Association. 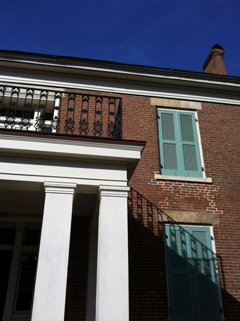 The Watkins home was built over several years using raw materials from the land around it – even the bricks. It was finished in 1854. These Federal style columns and iron fence-work have been beautifully restored. 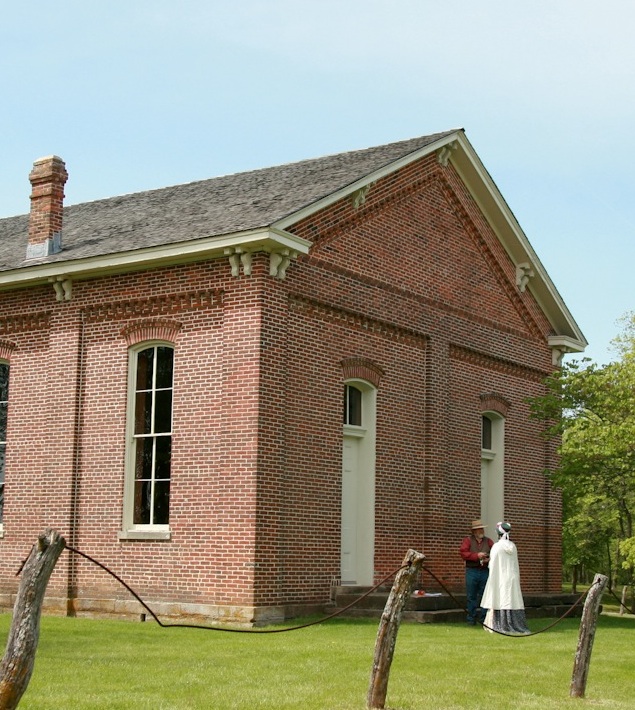 When Watkins donated land for this building and suggested a floor plan, he was put in charge of its construction. 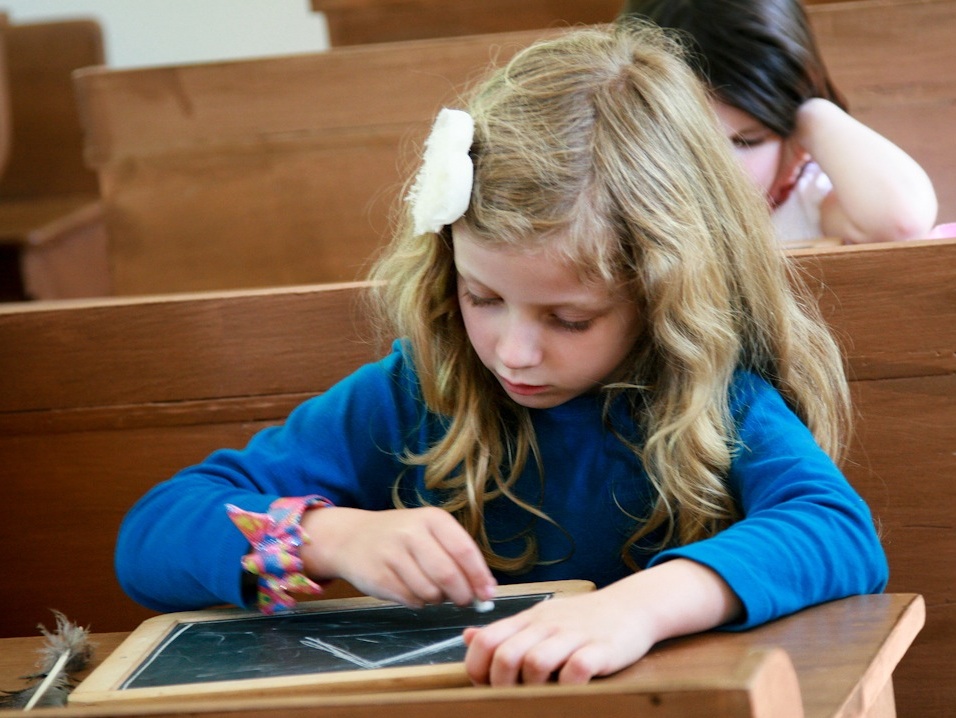 Modern day students are able to focus in the soothing interior of Franklin Academy, which was restored in 1981. 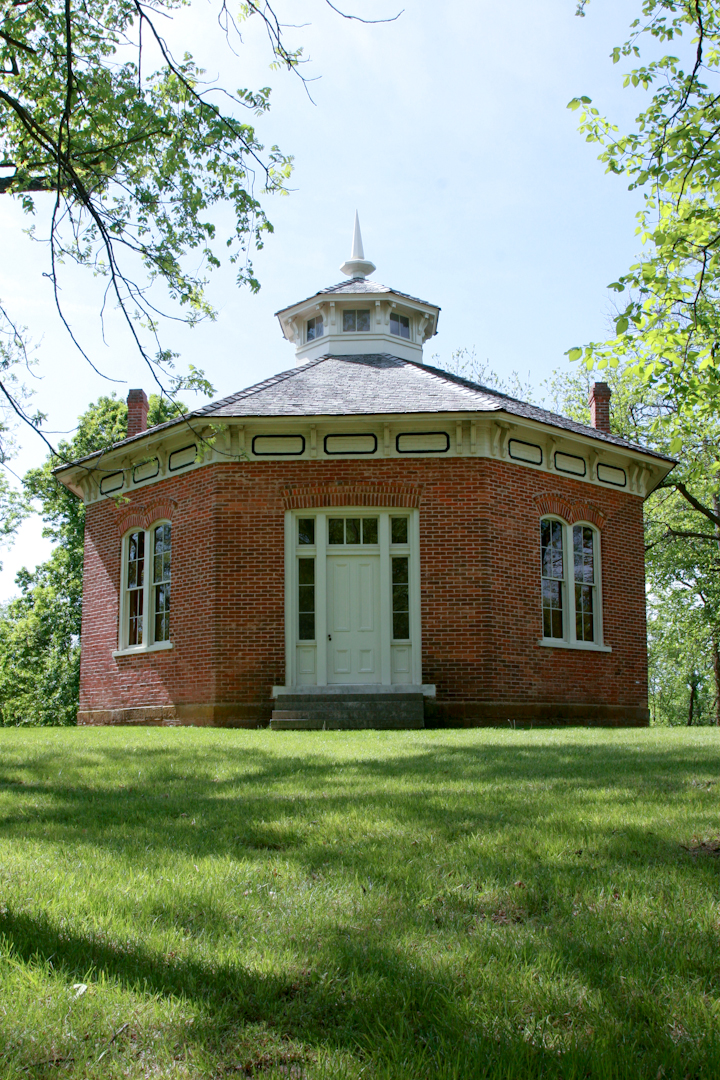 Franklin Academy is stunning both inside and out.